Thank you for visiting the New Horizon Emmaus Community website. 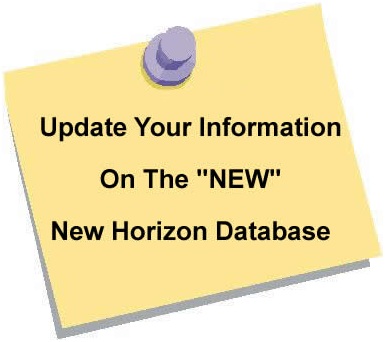 Each month our community gathers to praise and worship, welcome our newest members, fellowship with one another, pray for the teams and pilgrims on upcoming walks, and hear about one of our member’s 4th day journey. Don’t miss out on this powerful experience! Everyone is welcome!

Community gatherings are always held on the third Thursday of each month at the First United Methodist Church in Amherst. We start at 6:30 pm with Potluck Dinner in the Fellowship Hall then we will move into the auditorium for worship, prayer and 4th Day speaker. Childcare is available.

We will not meet again until January 2024.

To sign up for a 30-minute increment of prayer for Pilgrims and Team Members during any of our scheduled events, please email our Prayer Vigil Coordinator Melody Turner at melo628@hotmail.com or sign up on any of our prayer charts at our Community Gatherings.

Areas of Service for Emmaus

We welcome and encourage your participation in our Emmaus Weekends. Your help is needed to make the experience one that will bless and have a lasting effect on all the pilgrims. Prayer is very important in every aspect of the Walk to Emmaus and commitment is also needed. Please pray and ask God to lead you in the areas that you choose to serve on each walk. God’s timing is always right!

A great way to support Emmaus is to sponsor a pilgrim. Prayer and careful consideration before selecting a pilgrim to sponsor is extremely important. Please do not push anyone to come to an Emmaus weekend before they are ready. Let God be your guide in approaching someone for sponsorship. Be sensitive to the Spirit’s leading and you will be blessed to be part of a wonderful experience for others.

Duties of a Sponsor include: praying for your pilgrim before and during the walk, answering any questions that the pilgrim might have about the walk before hand, bringing your pilgrim to Send-Off, attending Sponsor’s Hour, collecting letters for your pilgrim, making sure any concerns of your pilgrim are taken care of during your pilgrims walk so they do not have to worry about those they left at home, attending candlelight and closing.

Agape is a very busy area of service. Your help is needed to fill all the needs of Agape!! Food, drinks, water, fruits, vegetables and dips are needed for every walk and any homemade item is always popular!

Agape gifts and banners are also needed. If you or your reunion group can supply some of these, please try to have them at the walk early so the Agape Team can be ready for the weekend.

The 72-Hour Prayer Vigil is set up for each walk. Your Prayers are very much coveted for the weekends! Prayer opens the heavens and lets God’s blessings pour down. Things happen at Emmaus because you pray!!

You can sign up for a slot yourself on our web site by clicking on the “Prayer Vigil” Link or by contacting the Prayer Vigil Coordinator and she will do it for you.

Attending the Activities of the Weekend (we need you there!)

Serving as a Team Member

Serving on each Emmaus Team is always rewarding and a great blessing. Sharing your talents, gifts and testimonies are a great way to help others to experience a great weekend. If you are interested in serving on a walk, please fill out a volunteer form from our web site. Our community has grown so large that filling out the volunteer forms is the best way to keep letting us know that you are interested in serving on a team. You are also welcome at the team selections which occur once or twice a year. Please contact any current board member for more information on team selections.

Serving as a Board Member

A very important aspect of service to the New Horizon Emmaus Community is serving as a board member. This requires dedication and commitment  You are required to attend meetings, gatherings and candlelight services. Board meetings are held almost every month.  You are responsible for every aspect of the Emmaus Walks and will be assigned duties each year to help keep Emmaus running smoothly. It is a rewarding area of service but it does demand time and energy.

Board Members are elected each year and will serve for three years. Please pray about this very important part of Emmaus. All board members need your prayers  and support to do the best job they possibly can. If you are interested in serving as a board member or if you know someone who would be, please contact any current board member or send us an email through the Emmaus web site. Board Nominations are taken up to November 1st each year. We need your input to fill these very important seats. Please be in prayer for your board and all the decisions that they must make.

History of the Walk to Emmaus

The Emmaus Movement in the United Methodist Church has its ancestry in the Roman Catholic Cursillo.  In Spanish, “Cursillo” is a very common word, derived from “Curso”, which means “little course”, something that is done in a few days rather than in weeks or months.  The term Cursillo connotes the idea of intensity, of doing a great deal in a very little time.

Cursillo began on the island of Najorca, some 170 miles southwest of the mainland of Spain, sometime in the late 1940’s.  During the period of 1936-1939, Spain had been involved in a bitter Civil War, followed by the World War II years of unsettled conditions.  The desire for Church renewal and inspiration for the life of the Apostolate grew out of these nine years of much stress within the country.  Throughout Spain, and in the twenty Republics of Latin America, the “Young Men’s Branch of the Catholic Action, “similar to the Episcopal Youth Organization, Catholic Youth Organization, and the United Methodist Youth Fellowship, planned a pilgrimage to the Shrine of St. James del Compostela at Santiago Spain.  To prepare for this, the Catholic Action leaders on Majorca formed Leader’s Schools in which they gave short courses to prepare for this pilgrimage.

The leaders of the Catholic Action group called the courses Cursillos, in part because this term is not essentially a religious one, and in Spain andMajorca there was a strong laity, of militant independence almost to the point of being anti-clerical.  Therefore, these courses were designed not to be overly “pious.”

As the leaders of these early Cursillos refined their courses, which were designed for small groups, they found that they were attracting young men who were not active in Catholic Action, and had no desire to be.  They wanted to be part of the Cursillo and pilgrimage.  The early Cursillos were 6-7 days long and were held during special occasions (festivals or Saint Weeks), but gradually they were shortened to 3-4 days.  The talks were “Youth of Catholic Action,” “The Leaders Profile,” and included clerical talks “The Church” and “The Mystical Body of Christ.”  In time, these Cursillos evolved in “Cursillos de Christiandad” – short courses in Christianity, somewhat as they are today.

Cursillo could not be contained and it continued to flourish.  A National Secretariat was formed and received Papal approval in 1963.  The movement grew to a shared clerical and lay directed movement, which essentially it is today.

In 1956, Cursillo was brought to the United States by two Spanish Air Cadets who were studying at Lackland Air Force Base in San Antonio, Texas. The format of the three days and the talks were translated into English in Texas in the late 1950’s and early ‘60’s.  The Roman Catholic English Cursillos started the Cursillo with their brothers and sisters in Christ – Episcopal, Lutheran and with the United Methodist Church in Peoria, Illinois, and Nashville,Tennessee.  The United Methodist Church began its expression of Cursillo in about 1977 and called it “The Upper Room Cursillo.”

This came about after several members of the staff of The Upper Room in Nashville attended a Lutheran Cursillo in Miami, Florida, and it was decided to actively consider the spiritual formation ministry for the United Methodist Church.  At the same time, Rev. Robert R. Wood was serving a UnitedMethodist Church in Peoria, Illinois, where he had been involved in the Roman Catholic Cursillo.  This was a strong ecumenical Cursillo, and Bob served on several teams.  (To date, he estimates that about 500 members of this church have attended Cursillo and Emmaus weekends.)  The decision was made to develop a United Methodist model at Peoria, where Bob would be the Spiritual Director for the first weekends.  After the first two model weekends in April and May, 1977, he was invited to join the national staff and work in its final development.

In the beginning, it was prayerfully hoped that The Upper Room Cursillo could be a part of the regular Cursillo movement, and a general agreement was worded out whereby the United Methodists could use the term Cursillo and be a part of the Cursillo family.  During two years of this relationship, the United Methodist movement grew anlong ecumenical lines.  However, in 1981, by mutual agreement between the National Secretariat of the Roman Catholic Cursillo Movement and The Upper Room, the Emmaus Movement was given its name.  Thus began the life of The Upper Room Emmaus Movement in equipping knowledgeable church leaders with a vital piety.

By 1984, The Upper room Emmaus Movement has established communities in forty-four “free-world” communities and in nine correctional institutions. On several occasions, Emmaus communities have cooperated with Kairos, a prison Cursillo-type ministry.  It is estimated that approximately 20,000 persons had attended a Walk to Emmaus weekend by 1984.

In the fall of 1984, the Walk to Emmaus was taken to Australia and shared with leaders of the Uniting Church and thus became an international movement.

The Upper Room philosophically is committed to ecumenical efforts.  Therefore, although Emmaus is under the jurisdiction of the United MethodistChurch, it is supported and attended by persons of all denominations.  The over all content and techniques are the same as those in the Cursillo communities, and Roman Catholic, Episcopal, and Lutheran churches have continued their strong and loving support.

There is an Advisory Committee composed of one clergy and one lay person from each area in which the Emmaus Movement is active.  Annual meetings are held the third week of July at Lake Junaluska, North Carolina, concurrent with the Prayer and Bible Conference sponsored by The Upper Room. This is a time for spiritual renewal, workshops, and consideration of matters of common interest.

The GOAL of Emmaus, like Cursillo, is to make Christian communities possible in neighborhoods, churches, work situations, and all other places where people live the greater part of their lives.  It attempts to make it possible for anyone to live a Christian life in a natural way.  It attempts to put a renewed meaning and add a boldness to the most important proclamation that anyone ever will make – “I am a Christian!”